Biography
The band H'Sao was initially made up of three brothers and one sister Rimtobaye. They sang at first in the church were their father was the pastor, who named the group Hirondelle (swallow). In 1994, they performed for the first time outside of church, at the Fête de la musique, organised every year by the French Cultural Center. The performance was met with acclaim and the three brothers started to perform more frequently.

They were joined by drummer Dono Bei Ledjebgue in 1995, and the group changed its name into H'Sao, where the letter "H" still stands for Hirondelle, and Sao refers to the ancient Sao civilisation that was based in the Lake Chad region from the 6th century until, probably, the 15th or 16th century (cf. [2]).

In 2000, H'Sao was invited for the Fest'Africa festival in Lille (France). They recorded their first demo and bought instruments as, so far, by lack of financial means, they used their voices only to create their unique style of music, influenced by gospel and their Chadian roots, mixed with soul, pop and R&B. They sing in English, French, Arab, Sara and Kabalaye.

In 2001, H'Sao was selected to represent their country at the Jeux de la Francophonie that was held in Ottawa. They won the bronze medal at the event. The group decided to settle in Montreal and soon they were invited at several events and festivals. In 2003, H'Sao presented their first album « H'Sao » at the Montreal International Jazz Festival. Six years later, in 2009, they released a second album, the title « Vol 235 » (Flight 235) refers to a virtual flight back to their roots in Chad (235 is the international phone prefix of Chad), whereas H'Sao, at the same time, had gained new experiences and influences during their stay in Canada. H'Sao has become a well-known exponent of the multicultural music scene in Canada. A new album « Oria » aims at an international break-through. 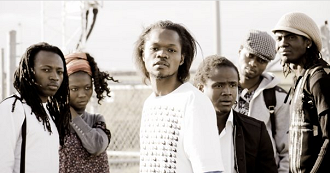