Biography
In the small country of Bénin, many bands were formed, and a raw and psychedelic style of afrobeat developed. The most prolific band was the Orchestre Poly-Rythmo de Cotonou, producing tens of albums and even more 7-inch singles. Their music took traditional rhythms from Benin with its Voodoo (vodun) culture as a starting point and was very much influenced by soul music. James Brown was hot at the time. But Poly-Rythmo also played salsa, soukous and other West African tunes. The band started in 1968, and was at some point called Orchestre Poly-Disco, as they were the house band of a label of the same name. A new manager who had a nightclub changed their name in El Ritmo. From the moment Adissa Seidou of Albarika Store, who would release a large amount of their work, started working with them, they decided to keep the name of Orchestre Poly-Rythmo. This was in the second half of 1969.

Poly-Rythmo started with five members, being Melome Clement, Bentho Gustave, Amenoudji Vicky Joseph and Bernard "Papillon" Zoundegnon, but at their peak, the band counted 16 members. Still in 1969, the need for a soul singer was felt, and Vincent Ahehehinnou was recruited from Daho Jazz. He would contribute significantly to the success and the distinctive sound of Poly-Rythmo. He left the band in 1978 for undisclosed reasons.

After first successes, the international contacts of their producer of Albarika Store enabled them to record in the EMI studios in Lagos, Nigeria. What followed was a range of singles, albums and various artists recorded with Poly-Rythmo, such as Danialou Sagbohan, Betti Betti and many others. Also, recordings were made by band members or even the whole band with other small Beninese labels with a distribution hardly wider than the city boundaries. But overall, they never had the exposure towards international audiences. "Benin's best kept secret" became only known outside Africa two or three decades later, after the release of a few influential compilations on labels Popular African Music, Soundway and Analog Africa. Although the band had lost a few of its members and seemed forgotten, Poly-Rythmo never ceased to exist. With the success of the compilations and a general growing interest in afro-beat and afro-funk, Poly-Rythmo started touring again in 2009, in Europe. The new 10-piece band contains five members from the old days, Gustave Bentho, Melome, Vincent (back after all those years!) and Pierre Loko.

In 2011, a new studio album « Cotonou Club » came out, recorded in the old Lagos studio with analogue recording equipment, in order to keep the old seventies sound. 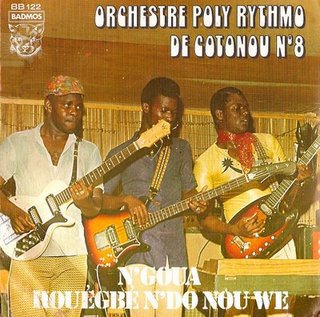