Biography
Nawal originally comes from the Comoros Islands, also known as the Perfume Islands or Islands of the Moon, located in the Indian Ocean off the eastern coast of Africa. Born into a family with many musicians, Nawal bathed in both popular and spiritual music from a young age, in her native islands and also in her new home in France. The sounds of her youth included the dhikr (Sufi chanting) in mosques, twarab music, and her uncles band that played the popular tunes found on 1970s radio airwaves.

After the return to her native islands in 1985, Nawal rediscovered her cultural legacy and decided to bring it to light. In her music, Nawal mixes Comorian rhythms with bantu polyphony, Indo-Arabian-Persian sounds and Sufi chanting into an acoustic roots-based fusion. With her strong voice, she puts on the fore a message of global values such as love, respect and peace. Being an African Muslim woman, she had faced many barriers in her career. Descendant of the grand Sufi marabout of Comoros, El-Maarouf (1852-1904), she remains close to Muslim values, but sings for all humans, advocating education and union. She is known as the Voice of Comoros.

Nawal has collaborated and recorded with various groups such as Donna Africa, Malgache Connexion and Touloulou. Since years, she performs her own music and released her first album « Kweli » in 2001. Nawal was also featured on the Putumayo release « Women of Africa » in 2004. She currently performs as a trio, with herself on vocals, guitar, gambusi (stringed instrument from Comoros) and percussion (daf and bendir), Idriss Mlanao on contrabass and Melissa Cara Rigoli on mbira and various percussion (calabash, udu, hosho, cymbal, etc).

In 2005, Nawal has been selected along with Góo Ba (Senegal), Ze Manel (Guinea Bissau) and Tunde Jegede (Nigeria) to compose the First Sahel Opera, that has been realised under the musical direction of Wasis Diop.

Nawal tours regularly, and she released a new album in 2007, which is now available in Europe and beyond. 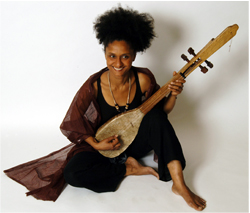