Biography
The music of Zambia has not attracted large crowds abroad, but nevertheless, the country has developed an active music industry. There is a rich heritage of traditional music, partly documented and recorded by ethnomusicologists such as Hugh Tracey. After independence in 1964, several bands were created, as well as a record company (Teal Records), and guitar driven music from the Copper Belt region developed into Zam-rock, mostly sung in English. After president Kaunda's rule that 95% of all music broadcasted should be Zambian, a poppy version of traditional banjo music emerged, kalindula. Main exponents were Amayenge, Serenje Kalindula, Junior Mulemena Boys, Distro Kuomboka, and Masasu Band. Kalindula has been very popular during the 1980s and 1990s, but since then the liberalisation of the radio stations witnessed a wave of imported music such as reggae, hip hop and R&B, to the detriment of local styles.

Masasu Band was led by John Mulemena who sings and plays guitar. They hail from the Copperbelt, in the North-West Province, home of the Kaonde people and their kalindula music is played in a specific mantyantya dance. Several band members such as John Mulemena and Jeasi Bwaluka are Kaonde, others are Lozi or Bemba. The lyrics are either in Bemba or in Kaonde.

Their album « Masasu », recorded at dB Studios in Lusaka, was released in the UK in 1989 and apparently sold out shortly after release. A second album was released more than a decade later. 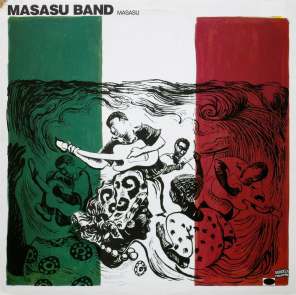