Biography
The band Mamar Kassey was formed by Yacouba Moumouni in 1995. Yacouba's life as an artist starts when he left his village of pastoralists for Niamey after his father's death and a conflict with his elder brother. Aged 10, he walked about 200 km to Niger's capital. In 1979, he met the singer Absatou Danté, sister of the director of the Ballet National du Niger, Alhassane Danté. She taught him the musical traditions of his country. He learnt the Seyse, the flute of the Peul (Fulani), and after seven years of training, he was adopted in Absatou Danté's band, and later in the Ballet national.

In 1990, he became one of the singers of Orchestre Takeda, the house orchestra of the newly opened musical academy Centre de formation et de promotion musicale in Niamey. Here, he teamed up with Abdoulaye Alassane, guitarist, and band leader of Orchestre Takeda. Alassane had created Super Kassey back in 1983, a band which name was changed into l'International de la Capitale. This band, which was the house band of the night club Gaskama, broke up in 1988.

At the creation of Mamar Kassey towards the end of 1995, Yacouba called upon the best musicians of country, some of them he met at the CFPM, among them Abdoulaye Alassane.
The music of Mamar Kassey has a distinct West African flavour, comparable to the music of Mali, but uses instruments and musical styles from Niger. The lyrics are in Songhai or Peul.

After a successful performance at the Atypical Nights of Langon Festival in 1998, Mamar Kassey soon produced a first international release called « Denké-Denké », followed two years later by « Alatoumi ». Both albums received raving comments by the press. Yet, a long period of silence followed, and it wasn't until 2013 that a new album was released. 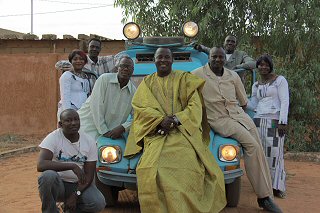