Biography
Kafala Brothers, José and Moises Kafala, started performing together in 1987 in Luanda, Angola's capital. They sing about their country, ravaged by 30 years of war, about how life during wartime, about sadness, love and joy. They sing together in heartbreaking harmony, in Portugese, Kimbundu and Umbundu, and they are just accompanied by their dry guitar. This is pure African folk music, although blended with influences from Congo, Brasil and Cuba. Their success came early, and after their debut album « Ngola », they toured extensively, spanning over 20 countries.

In the mid 1990s, they released a second album, « Salipo (Goodbye!) », produced by The Mendes Brothers from Cape Verde. The album was, like the first one, distributed on an international scale. Unfortunately, things have become very quiet since. This is a pity, also since, besides artists such as Bonga and Waldemar Bastos, not much Angolan music hits the international market, at least until the more recent Kuduro craze... 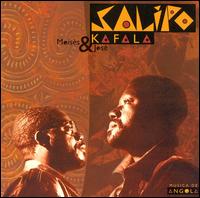