Biography
The music of Aster Aweke is one of the most popular Ethiopian artists of a younger generation. In the past 30 years or so, singers like Mahmoud Ahmed and bands like the Roha band and the Wallis Band performed in Ethiopian night clubs, sport stadiums and sold hundreds of thousands of cassettes, but little of this was known to the West until the 1990s.
Ethiopian music is quite different from music of other African countries, with bluesy and soul influences, the use of the piano and a distinct horn section. Nowadays, the keyboard is widely in use, but, surprisingly, this harms the power of the melodies and haunting rhythms much less than could be expected.

Based in New York since the early 1980s, Aster Aweke adds her talent and expressive voice and partly thanks to the pioneering British World Music label Triple Earth, her talent was also recognised outside of the Ethiopian community through the release of her first two international albums, « Aster » and « Kabu ». 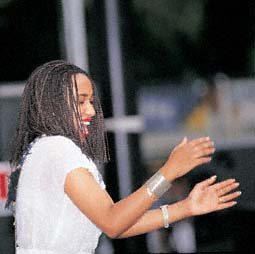