Biography
Andrian is a young musician, of a Malagasy father and a French mother. His father taught him to play piano, and he has been brought up with music from Madagascar, both modern and traditional, but also with classical music, rock, jazz, blues and French chansons. It is as if he absorbed all these influences, before producing a first batch of songs at age of 25, showing an amazing talent for composing and writing song lyrics.

After first musical experiences in France (Andrian spent nearly half of his life in France), he decided to make his own music and he got help from a famous Malagasy musician Rossy. This eventually enabled him to record a first batch of songs in the MARS studio in Antananarivo.
A first CD with six titles came out, carrying the title « Écoute » (Listen), produced by Stéphane de Comarmond, as a foretaste for his anticipated first album with 14 songs planned for the second half of 2005. The songs on the album are of pure beauty, with a strong emphasis on the piano, rather unusual in African music. Large parts of the albums are sung in French, which is giving an international flavour to his work, but on other parts folkoric influences can be heard. The lyrics often refer to universal values such as tolerance, mutual respect, love and modesty. Andrian is currently in France promoting his music and hoping to release the complete album soon. The album deserves to be. 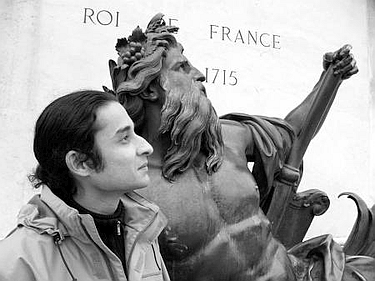