Biography
Djouna Big-One (or Djouna Mumbafu) has been known as a prominent animateur (atalaku) and dancer in Empire Bakuba. Among others, he revolutionarised Congolese music with his choreographies and « atalaku » yells. Following the death of band leader Pepe Kalle, Empire Bakuba fell apart into various factions such as Fondation Bakuba and Delta Force, a former youth group set up by Pepe Kalle. Djouna was part of Delta Force together with Godé Lofombo, but after some time Djouna decided to start a solo career.

In 2004, he released a first solo album « Tonnèrre de Brest », and a live DVD, and in December of the same year he was a finalist for the Kora Awards with the song « 6600 Volts », but he didn't win the award. In Djouna's current band, called Orchestre Big One, the younger brother of Pepe Kalle, Ali Kalle, is one of the singers. Ali Kalle's voice is very much reminiscent of Pepe's voice. 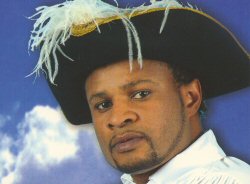