Biography
Vieux Kanté was born in 1974 in the Sikasso region in the South-East part of Mali. He was born blind, but this didn't stop him to play drums just like all kids in his home village. When he was eleven, his brothers would go to the fields, leaving Vieux at home alone. He started borrowing his brothers' six-string harp, the kamale n'goni (youth harp), and learned to play songs he heard on the radio and at local parties [2]. The kamale n'goni was developed only recently, in the 1960s, based on the hunter's harp, but without the secrecy. The kamale n'goni became a very popular instrument among young villagers in this part of Mali.

In 1987, he decided to go to the capital Bamako, where he came into contact with a variety of musical styles, such as jazz and blues, as well as improvisation. He adapted his n'goni from 6 to 8 strings, then 10 (1997) and eventually 12 strings towards 2000. He thus increased the tonal range of his instrument, yet it was his talent that enabled him to play a complete range of jazz notes. According to some accounts [2] [3], Vieux Kante was invited to the Netherlands with the help of a Dutch hotel owner in Bamako, and he played with saxophonist Hans Dulfer, American jazz trumpeter Lester Bowie, and with crossover band Fra Fra Sound in 1997, featuring on their album « Mali Jazz  Collaboration Musique d'Afrique ».

Back in Bamako, he met French musician, arranger and sound engineer Vincent Dorléans and together, they made some recordings with rudimentary equipment. The recordings could not be used at the time, due to the bad equipment and oversaturation. Only with the latest music editing software, Dorléans could rework the material and release it more than 11 years later on his label Sans commentaire. In 2005, Vieux Kanté recorded a first cassette, that hardly hit it to the market at the time. In 2016, this cassette is being released by Stern's Music carrying the title « The Young Man's Harp ». Although quite loved in Bamako and in the Wassoulou region, Vieux lived in a remote part of the capital, with no water, no electricity and no telephone and he didn't have the chance to reach an international audience. He therefore might have missed out some invitations, it even seems that other musicians adopted the name Vieux Kante in order to get a gig occasionally. Vieux died of malaria later in the year 2005. 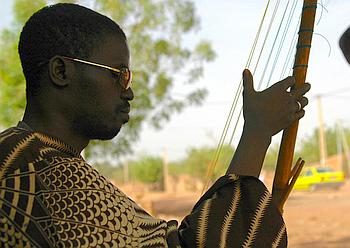