Biography
Missia Saran Diabaté, nicknamed «Petit Piment » is another exponent of the present day generation of female singers in Guinea. Originating from the town of Kankan, her mother died when Missia Saran was young, she grew up with her brother and one sister Oumou who became also known as a singer (Oumou Dioubate).

Her lower-key voice works well with the Paris mix of horns and a rhythm section programmed by Philippe Guez, resulting in a danceable mix of Guinean electric mandingo music with Congolese and Pan-African influences.
Her first album «Soron M'ba - Petit Piment », produced by Boncana Maiga has been distributed by a French label and was already very successful in Guinea.

Despite the success of Missia Saran's debut album, it took many years until a second album, «Angnéwama » came out. On the album, composed by her brother Gnamakoron Sidi Diabaté, she sings about injustice and traditions she disapproves of.
In 2016, Missia Saran Diabaté married with musician Famoro Dioubaté in New York, and since then she bears the name Missia Saran Dioubaté. She now sings with Famoro's band Kakandé, from their base in Harlem, New York. 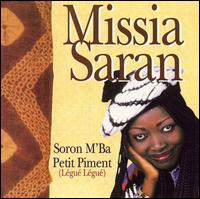