Biography
Instinct Killers started as a group of hip hop dancers in the 1990s, at the initiative of a young choreographer. The first years were not easy, and several group members left to create another dance group Black Killers (renamed in 2014 into Black Never Die). Between 2004 and 2007, Instinct Killers won several awards as best hip hop dance group in Guinea, but also in Senegal. Around the same period, they recorded a first cassette in Senegal, « Nouvelle Expérience », that was reasonably successful, although the revenues for the band were negligible.

The Conakry-based Meurs Libre Prod' decided to support Instinct Killers and this partnership enabled them to release a second album « Akhril Djaman », that contains the hit song « Dewi », one of few Guinean songs with more than one million views on YouTube (by 2016). They won again several Cassette d'Or awards for this album. In their music, they sometimes use the sounds of typical Guinean instruments such as the pastoral flute, the kora and percussion, and in their hip hop dance moves, inspiration is drawn from Guinean dances as Doudoumba, Toupousséssé and the Yankadi.

In 2013, they won a Guinea Music Award for their single « Kilélélé », and lead singer Fish Killer, still backed by the group, made a solo single « Woyen Woyen Fé » in 2014. An all-new album was finally released early 2017. 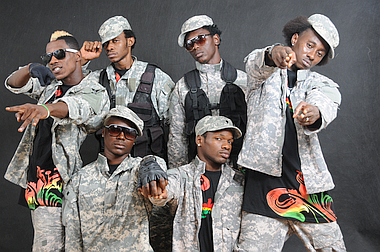