Biography
Horoya Band was one of the many orchestras in Guinée-Conakry during the 1960s and 1970s. Under the regime of Sekou Touré, the best bands were awarded with the title Orchestre national and had the possibility to travel to Cuba to learn more about Afro-cuban music.
After having won yearly awards three times from their home town Kankan, Horoya Band achieved the title of national orchestra in 1971, as one the last orchestras. The band was led by Metoura Traoré (tenor sax). Two years later, in 1973, they recorded a LP on the state record label Syliphone, entitled « Zoumana », also referred to as « Savane profonde ». These recordings have been re-issued on CD.

When the state support for culture disappeared with the death of Sekou Touré, many of the orchestras disintegrated, such as Kélétigui et ses Tambourinis and Balla et ses Balladins. Horoya Band faced similar problems and and recorded and performed rarely. They were, however, successful at a concert where several old orchestras performed in 2008 in Conakry.
When Metoura Traoré retired, conga player Lamine Camara became band leader. Apparently, the band was without instruments by 2013. 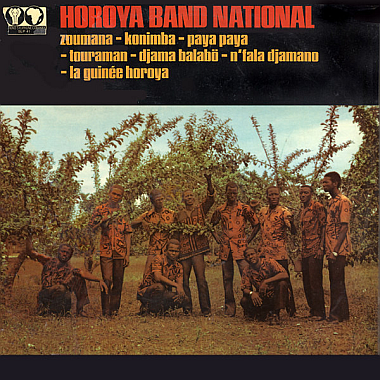