Biography
Ibro Diabaté is one of the bigger stars in Guinée of the 1990s and in the first decade of the 21st century, already since his first album « Allah Nana », recorded in Paris and produced by Boncana Maiga.
Hailing from the Boké region, where his school results were not convincing, he went to Conakry in 1981 to continue his education. After 2 years, he returned and decided to make music rather than continue his studies. Accompanying himself with his guitar, he started performing, and soon people were impressed by his music, or rather the message he tries to bring about with his lyrics.

After his debut album, two other albums « Eh! Wotan » and « Affaires » followed. His albums are well-produced, his tenor voice and lyrics, generally about social issues and relationships are appreciated by the public in Guinea.

After a longer silence of several years, his album « Esclave de l'argent » was finally released in October 2003, followed by another album in 2006.

His daughter Ibro Gnamet Diabaté is a successful singer who recorded a few singles starting from 2015, and featured on two songs by Azaya, « Allah Nahna » and « J'aime tout chez toi » (2017). 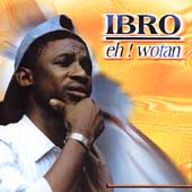