Biography
Sayon Camara is a young singer from Faranah in the central part of Guinea. She who earned her nickname « Taramakhè » (agitator of the town), because of her flamboyant performance. Accompanied by her husband and guitarist Mamadou « Lakras » Cissoko, she succeeds in mixing the Guinean musical heritage with international, mainly Congolese, influences into a very dancable cocktail.

Her first album, « Dinguiraye », recorded at the JBZ studio in Abidjan, was a big hit. With only one album she established her fame in Guinea as one of the most important female singers of the country. It took another 4 years before a second album « Saramaya » was released, again recorded at the JBZ studio. At the release party in May 2002 in Conakry's Stade du 28 septembre, Sayon was offered a villa and two cars by generous well-to-do fans she had sung about. Need one say more about here popularity?

In June 2002, Sayon Camara was nominated UNESCO artist for peace. She will use her talents and fame in the West African region to help promote public awareness of the UNESCO's activities. 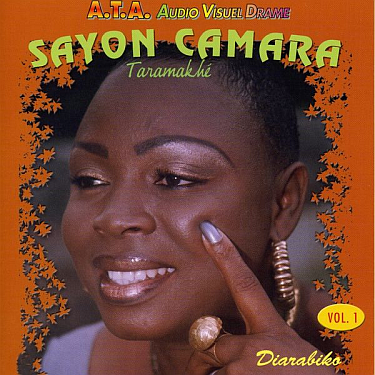