Biographie
Kélétigui et ses Tambourinis might be nearly forgotten nowadays, but they have has been one of the most influential bands in Guinea during the 1960s and 1970s. Soon after Guinea's independence, the 25-piece National Orchestra had so many talented members, that it was decided to make two orchestras of it, l'Orchestre de la Paillote under the direction of Kélétigui Traoré, playing in the club La Paillote, and l'Orchestre Jardin de Guinée under the direction of Balla Onivogui, playing in Le Jardin de Guinée. After a while, l'Orchestre de la Paillote was renamed in Kélétigui et ses Tambourinis. l'Orchestre Jardin de Guinée became Balla et ses Balladins.

The music of Kélétigui et ses Tambourinis is what can be expected of the Guinean orchestras of their era: big band sound, passionate singing and, especially in the case of the Tambourinis, great guitars.

Various band members have now passed away, and band leader Kélétigui Traoré died on 11 November 2008 at the age of 74. Linké Condé took over as band leader. 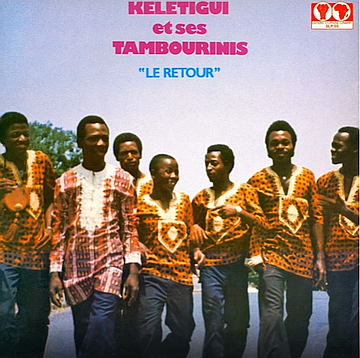 
Created: 1964, as the house band of the Paillote Club
Style: mandingo music