Biography
Zao, or Casimir Zoba in full, is known for his song with lyrics full of biting social commentary and satire, such as « Ancien combattant », « Corbillard » and « Moustique ». He has been infected with music since young age as his father was fan of the sanza, a thumb piano, and Casimir entered a religious choir when he was 12 years old. At secondary school, he was active in groups such as Les Adhérents and Gloria, but his parents judged that his school performance suffered and sent him again to join a church choir.

When grown up, he was recruited as a percussionist by Les Anges, and during the communist regime Congolese groups were often sent abroad to perform in friendly fellow-communist countries. Notwithstanding his musical career, he went to the Ecole normale to become a teacher. Parallel to this, he continued with Les Anges, but in the early 1980s, he started to sing solo and already in 1982, he received the RFI prix découverte for his song « Sorcier ensorcelé ». In 1983, he won another award (for the Best Song at the Central African Music Festival) with « Corbillard ».

Throughout the 1980s, he recorded various albums in Paris, and toured on a regular basis in France and other francophone countries. In the 1990s, Zao used his success to promote other, mostly more traditional, artists by producing them. He also made an album with new versions of older songs « Zao », but with limited success, especially in Africa.
His humourous lyrics are still loved throughout francophone Africa and he continues to perform in Africa. Zao lost almost everything (he owned a studio in Brazzaville) in the turmoil occurring in Congo-Brazzaville during the 1990s. At various points in time, he announced his retirement in music, but in 2006, he released a brand new album, « L'aiguille », with which Zao hopes to make a come back. 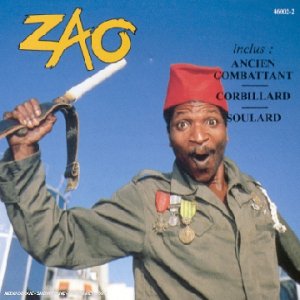