Biography
Douk Saga is one of the main exponents of the latest dance craze from Abidjan, the « Coupé Décalé ». He is seen as the creator of this variant of zouglou, at the moment very popular in Africa and among the African diaspora. What is Coupé Décalé? Musically speaking, it is a variant of zouglou, often mixed by DJs using Congolese influences such as the « atalaku ». The lyrics are often composed of a chain of riming words, repeating words as "couper-decaler, travailler, sagacité". Besides from being a music style, it is also a particular way of dancing. But above all, it is a particular life style.

It all started in Paris around 2000, among a group of a few young Ivorians referred to as the Jet 7 (Jet Set) showing a very flamboyant life style, making money in various activities and distributing a part of this money in night clubs in order to show off. Numerous songs, such as « Saga Cité » by Douk Saga, used the notion of Coupé Décalé (coupé=get money (by whatever means), décalé=leave, flee to Abidjan). Back in Abidjan, they went to nightclubs to distribute the money earned (referred to as travailler).
It is said that the way the money was earned in Europe was sometimes through illicite activities such as fraud, extortion, according to this article: link. In an interview, Douk Saga claims he was a successful businessman before entering music. In any case, substantial amounts of money are distributed among the public. This rather unusual form of amusement can be seen as a way for young Africans to forget the problems they have and especially to forget the problems Côte d'Ivoire was facing in those days. It is critised, though, for advocating a life style based on easy money.

From 2003, the music started to become popular with Douk Saga and DJ Jacob and others, and was at first distributed on various compilation CDs, video cassettes and DVDs rather than through solo albums, as the music tends to be a bit shallow, and the visual aspect of the dancing as well as the fancy cloths was equally important.

Douk Saga released his first international album (packaged as a CD with a DVD) only in 2005, but in Côte d'Ivoire he had already released two cassettes. Other exponents of this movement are Molaré (Moïse Soumahoro), Lino Versace, Boro Sanguy, DJ Jacob, DJ Caloudji, DJ Arafat, DJ Tévécinq and Solo Beton.

Douk Saga died on 12 October 2006 of tuberculosis, following a period of protected illness. 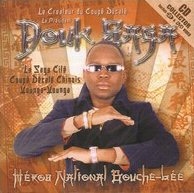