Biography
Wes Madiko featured in the charts in the Netherlands, Belgium, Germany, UK and France (in the Netherlands for about 30 weeks, from the end of 1997 until spring 1998 and peaked on a number one position for a few weeks) with « Alané », and also high in the charts of Germany and the UK. With this huge hit, Wes became known to a larger public than usual for an African artist. But apart from the song, the artist remained oblivious to the public, for instance, few know that he is actually from Cameroon.

Wes started music as a kid by forming a group called Kwa Kwassi with other village youngsters. A decade later, in 1987, he reformed the group and performed with his kalimba instrument mainly for touristic audiences in his native Bafoun region. A year later he came to France where he co-founded a band Fakol with Benjamin Valfroy and Jo Sene. They performed in various European countries. In 1990, Jacques, Wes' brother and a talented guitarist, died. Their father died a few months later, following a motorbike accident. This left a profound impression on Wes.
In 1992, Wes went to the United States, where he eventually met Michel Sanchez with whom he worked together on the Deep Forest musical project. On his own albums, he makes a mix of dance idiom with African flavoured melodies. He is also responsible for the song « In Upendi » of the Lion King 2 original sound track (1998). 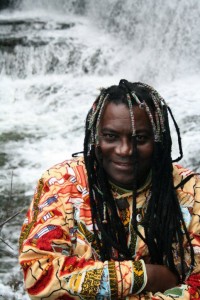