Biography
Lapiro de Mbanga alias Ndinga Man (=guitar man) is a songwriter known for his satiric lyrics, criticising politicians and addressing social and economical injustice in Cameroon of the 1980s and 1990s.
His biggest success came with his album « No Make Erreur », featuring Naimro from Kassav, Toto Guillaume and Jimmy Cliff. Singing mainly in pidgin, a creol language, he was able to reach a broad audience in all social layers of society, especially in those, where his criticism was well received, i.e. the young urban unemployed, street sellers, taxi drivers, etcetera.

At the culmination of Cameroon's political crisis around 1991, he had been accused of being "bought" by the ruling party. His club in the town of Mbanga and his car were put into fire, and a concert turned into a riot. He had suddenly lost his support from his fans. In 1993, he returns with a new album « Ndinga Man contre-attaque » (the guitar man strikes back). 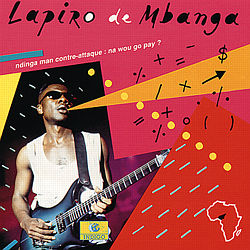