Biography
Saramaya is a group of four percussionists-singers and one female singer-dancer from the town of Bobo-Dioulasso in the South-West of Burkina Faso. They play a traditional music using percussion instruments as well as the balafon. The band was created around 1998 by Désiré Ouattara, who was playing since 1993 with Farafina Lili, led by Mahama Konaté. He participated in their concert tour in France in 1996 and 1997, after which he left the band and created Saramaya. 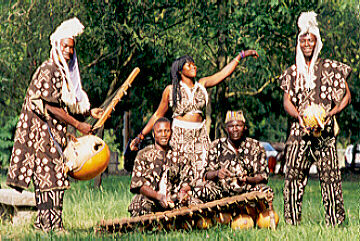