Biography
Sami Rama is called the gazelle du Boulgou, because of her elegance. Although born in Côte d'Ivoire, she is originating from the East of Burkina Faso, a country not quite known for producing as many musical talents as neighbouring Mali, although this might change in the future.

Sami Rama started singing at young age in groups like Les Petits Chanteurs au Poing Levé and the girls band Les Colombes de la Révolution. She recorded two solo albums in 1989 and 1992, and she was given the opportunity to represent her country at Korea Festival in Pyong Yang in 1990 (when she was only 19 years old).
In 1997, she performed in Madagascar at the occasion of the Jeux de la Francophonie. She released a new album in 2002, which was to be released internationally soon after. At the end of 2002, she won the Kunde d'or as the best female singer of Burkina Faso, but her dream to conquer international audiences did not materialise, as she had to be medically treated for her vocal cords. It was not until 2004, that she made a comeback after several medical treatments in France.

Sami Rama sings about peace, love and criticises the flaws of African societies. In order to reach a large audience, she sings in several languages, such as Bissa (her mother tongue), Dioula, and Mooré (the two main languages in Burkina), as well as in French. 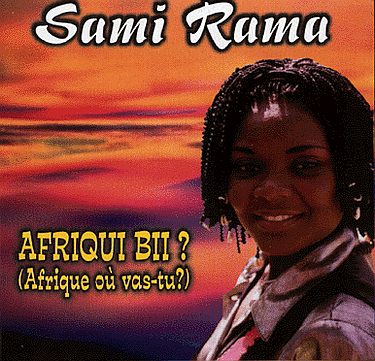