Biography
Djiguiya is a group of eleven percussionists-singers-dancers making traditionally inspired music based on percussion and the pentatonic balafon, for which the South West of Burkina Faso is famous for. Inspired on the Association Benebnooma in Koudougou, Djiguiya has been set up as an association not only making music involving young people of Bobo-Dioulasso in their own social-cultural development, but also to initiate small projects for young people and homeless children in their town. With the earnings of their concerts, Djiguiya financed a centre where homeless children find shelter, a meal and an opportunity to learn for example elementary mechanics, electricity, sewing or typewriting.

Most members come from the Farakan and Dioulassoba neighbourhoods of Bobo-Dioulasso, the second city of Burkina Faso. Although some members are mossi, dafi and samo, the majority is bobo, and the songs are in bobo and dioula, the main languages spoken in the South-West of Burkina. The songs are about coping with modern time problems (homelessness, Aids) using traditional concepts of mutual respect and understanding.

Djiguiya won rapidly acclaim in Burkina as of 1996, through successful participations in the Cultural Week of Bobo-Dioulasso and the Nuits Atypiques de Koudougou festival. They already performed in neighbouring countries, in Europe (France, Netherlands, Belgium, Germany) and in China. Their first album « Sakidi » came out in May 2003, and they performed in August 2003 at the Festival Nuits Atypiques de Langon (France). 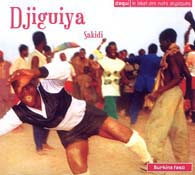