Biography
Fatoumata Dembelé "Djeli Mama" is born from griot parents, which meant that as of the age of seven, she would accompany her mother who sang in ceremonies such as weddings. When she was 25 years old, she started singing on her own during these ceremonies, but she sometimes sang in a group as well. In 1998, she has been asked to join Farafina after the group had seen her perform during a music festival in Bobo-Dioulasso. She contributed to their 2001 album « Kanou ». Between 1999 and 2002, she toured extensively with Farafina, on various WOMAD festivals, as well as on other festivals in the Netherlands, Germany (during the Expo 2000 in Hanover), France, Italy, Switzerland, Austria, Spain and Portugal. In 2003, she recorded a song with Solo Dja Kabako, a clip of this song was often broadcasted on Burkina and Malian TV. In 2004, she toured again with Farafina, and in that same years, she recorded three songs for the album « Sira Fila » by Burkinabe balafon player Mamadou Diabaté and his band Bekadiya.

In early 2006, Fatoumata was asked to join the Swiss world music band Taffetas, a group composed of Marc Liebeskind, Chérif "Nana" Cissokho, and Christophe Erard. She contributed to the recordings of their second album « Caméléon », released in the same year. In March 2007, her first solo album « N'naniba » came out, on which her warm and beautiful voice is accompanied by a small traditional ensemble of musicians.
Based in Switzerland since 2003, she returns frequently to Burkina Faso to perform during ceremonies. Along with her solo career, she continues to work with Farafina, Taffetas and with Bekadiya. 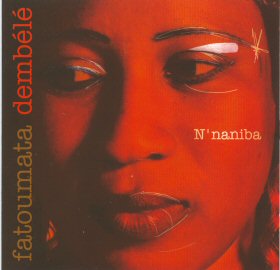